Is The Crypto Market More Resilient Than Traditional Finance?

On the 15th of September 2008, Dick Fuld, Chairman, and CEO of Lehman Brothers was having a bad day. Over the preceding decades, under his supervision, Lehman’s had walked a tightrope of extreme financial leverage driven by greed and poor risk management. Fuld was known for creating a ‘win-at-all-costs’ culture which saw his traders expose the bank to greater and greater risk as they chased their next annual bonus payment.

In 2007, the subprime mortgage market began to collapse and customers, unaware of the small print in many of their mortgages, started to default as interest payments skyrocketed. As a glut of property for sale hit the market, house prices continued to collapse with many borrowers finding themselves in negative equity.

Ultimately, those on the hook were the borrowers whose credit rating suffered and those who held the insurance products that paid out when the loans defaulted. As it happened, Lehman’s and many other investment banks had huge exposures to these insurance products and were in serious trouble.

As Lehman’s massive exposure became clear, the Federal Reserve summoned several banks to negotiate financing for its reorganization. These discussions failed, and Lehman filed a Chapter 11 petition that remains the largest bankruptcy filing in U.S. history, involving more than US$600 billion in assets.

What followed was a blood bath on Wall Street and around the world as central banks turned on the printing presses to pump liquidity into the market to stop the financial market from grinding to a halt. Incidentally, it was this huge monetary expansion that led to the increasing popularity of inflation-resistant cryptocurrencies such as Bitcoin that have a fixed supply that cannot be changed.

Why is this story relevant?

May 2021 saw the cryptocurrency market suffer its largest liquidity crisis to date. The overall value of crypto almost halved in a little over a week reducing the value of holdings by as much as $750 billion.

Aave, Compound, and Maker are DeFi protocols that account for nearly 50% of all total value locked. According to DappRadar, they saw liquidations hitting a record of over $1.17 billion worth of collateral. Although these numbers are far smaller than what was seen in the financial crisis, they represent a significant proportion of the total assets that were locked in these protocols. 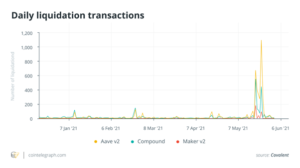 What was the result of this liquidation?

Fortunately, for the major lending protocols, 100%+ collateral is still required to borrow money. This meant when the liquidations occurred, there was enough collateral to cover margin calls and no platform or service was left holding the bill. Effectively, the market, through, self-regulation weathered the storm.

It has long been argued that a government backstop for the traditional financial markets is a major cause of excessive risk-taking. If the banks get into a position where they are effectively bankrupt and pose a threat to the financial system, the banks know they will be bailed out by taxpayers. This heads I win, tails you lose scenario does not incentivise responsible market practices.

In the world of crypto, no government bailout would be forthcoming in events such as May. Market participants are required to manage their risk and make allowances for extreme market conditions or face being wiped out. This self-governance has now withstood a major market shock and its biggest test to date, and it is fair to say that it has performed well. Aave since the crash have seen assets top $20 billion, a vote of confidence in their protocol that bodes well for the future.