Ethereum vs Bitcoin – What’s The Difference?

Every superhero needs an origin story, and Bitcoin’s is particularly mysterious.

Bitcoin was conceived as a digital replacement for fiat currency (dollars, pounds, euros, etc). It was first proposed in 2008 by “Satoshi Nakamoto”. We still don’t know who that is (and as the private key holder to the first Bitcoin block, they would be wildly rich).

They proposed “Bitcoin” in a white paper, which has obviously become legendary. Investopedia keeps an updated article: “Bitcoin Years Later: Was the Nakamoto White Paper Right?”.

Let’s skip forward to 2013 when a Bitcoin enthusiast called Vitalik Buterin was working on a project called “Mastercoin”. He imagined more for blockchain than just payments, and that same year wrote a white paper proposing “Ethereum” – a virtual, global computer built on blockchain. One crowdfund and a couple of years of development later, the first version launched.

Bitcoin and Ethereum are both based on blockchain technology, which means the blockchain contains an unalterable record of transactions, with new blocks of transactions being added periodically. When a new block is added, the party that put it there gets a reward.

Bitcoin and Ethereum are both decentralised: there isn’t a single company or party that owns it or controls it, though the Ethereum foundation oversees the engineering. As long as you can get access to the internet, you can use Ethereum or Bitcoin.

They’re also both cryptocurrencies: both have an ever-changing value and can be sent back and forth between parties. They can be bought and sold on cryptocurrency exchanges. It’s possible for someone to use ETH and know nothing about how it works, or why it’s different to Bitcoin.

Bitcoin and Ethereum also settled on a “proof-of-work” mechanism to generate rewards and as a way for the different computers on a network to reach a “consensus” – an agreement on a single source of truth. Woah, heavy. Initially, both could be mined from a laptop, but the difficulty was soon ramped up so that doing this was pointless since laptops couldn’t solve puzzles fast enough. Ethereum also adds blocks faster than Bitcoin, so the puzzles had to be less difficult.

This is the point at which everyone reading wishes there were time machines.

There are lots of cryptocurrencies that are very similar to Bitcoin because they were based on a large part of its technology, for instance, Litecoin (Bitcoin’s little brother) and Bitcoin Cash (the Robbie Williams to Bitcoin’s Take That).

Ethereum’s code and design were different in all respects: as you’d expect, since it was designed for a completely different reason to Bitcoin: it was designed as a world computer, not as an alternative currency.

Among many innovations, the primary one was Smart Contracts – pieces of computer code residing on the blockchain that could be triggered to perform functions if certain conditions were met (if you pay a little ETH to run it). Ethereum didn’t invent the idea of Smart Contracts, but it made them smarter: for instance, transactions can even contain executable code as data!

The other ability built into Ethereum from the start was the ability to use Smart Contracts to allow the creation of tokens: essentially, other currencies that used the Ethereum infrastructure. This exploded after the ERC20 standard was created. A token that adheres to ERC20 is guaranteed to be compatible with Ethereum wallets. Other standards were created that resulted in NFTs (one-off tokens) and Security Tokens (regulated tokens representing a fractional share of a real-world asset).

Having thousands of tokens on one blockchain (including ones called “stablecoins” that represent real-world assets like the US dollar and gold), means that you could build an entire finance ecosystem on Ethereum: which people did!

Bitcoin wasn’t built with the ability to host other coins, but a 2014 project called “Mastercoin” (the same one Vitalik Buterin worked for), created a layer over the top of Bitcoin to allow it. The name of that was later changed to “Omni”. By far the most successful was Tether, a controversial dollar replacement stablecoin. Because it was on the Bitcoin blockchain, it was the obvious choice for exchanges to use as a substitute for the real dollar in trading.

Because humans are awfully clever, there’s now a Tether and a Bitcoin (called “Wrapped Bitcoin”) on the Ethereum blockchain too.

Oh, and one big difference: there can only ever be 21 million bitcoins (they’ve mined 18 million so far), but there’s unlimited Ethereum.

Another oncoming difference is that Ethereum is moving to “Proof-of-Stake” instead of the Bitcoin-inspired “Proof-of-Work” – that is, instead of new coins (and the right to add blocks) going to computers that do the most work, the rewards will go to people who “stake” their coins back into the blockchain.

Bitcoin is often called “digital gold” since it’s a “store of wealth” (and gold in the real world, while useful, is more of a store of value than anything else – 95% of the world’s gold is used for storing wealth).

Ethereum is often called “digital silver”, because people love comparisons and because Ethereum is the second-biggest cryptocurrency after Bitcoin by market value. Also, Ethereum, like silver, is useful for all sorts of things.

At the time of writing, here are the market shares for cryptocurrencies: note that nothing competes with Bitcoin and Ethereum for sheer size: 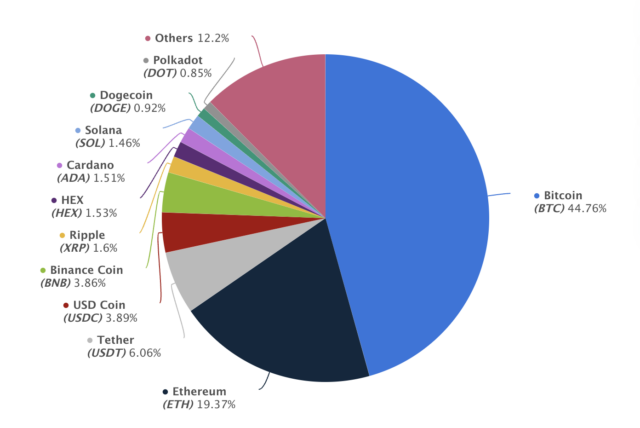 You can check out today’s values here.

Bitcoin or Ethereum – what’s your position?

It’s easy to be glib, here – for instance, saying that the Earth and Water astrological signs should be like Bitcoin because it’s more stable and solid, whereas Fire and Air signs enjoy the quicker market, versatility and drive of Ethereum.

One mistake investors in both make are assuming that when one of them goes up, the other goes down. In general, Ethereum follows Bitcoin. There may be days when one is up and one is down, but in a market downturn, they both go down against the dollar (dragging the rest of the cryptocurrency ecosystem with them).

What’s more, the crypto market is now more correlated with the stock markets than it’s ever been, because of the increasing entanglement between them as crypto becomes a viable alternative investment for portfolios.

Bitcoin’s prospects for the future are based on its increasing ability for financial transactions, but also its scarcity. While it goes up and down, the five-year picture is always up. Apart from making transactions faster, there are no particularly big changes or milestones for Bitcoin coming up.

Not so for Ethereum, which is about to have the most important upgrade of its life. It needs it, too, because it’s become too successful for its own good, resulting in networks becoming clogged and transaction fees going through the roof.

If the upgrade works out, then traditional finance might jump across to an Ethereum infrastructure that offers instant settlement and 24/7 trading. Why choose Ethereum for that? Mostly because of its perceived safety and “unhackability”. If that happens, then the price of Ethereum might surpass Bitcoin, despite being in unlimited supply (the maximum number might be unlimited, but the rate it’s being produced is time-limited, so there is scarcity there).

Our crystal ball isn’t working, so unfortunately only time will tell whether any of this works out.

One thing that is certain is that you can easily buy your bitcoin and ether at AQRU with one single low commission of 0.35% and a competitive exchange rate, and then invest it for monthly interest.

For the latest updates, articles, offers and earning opportunities, sign up today!