How to Easily Invest in DeFi

In its purest form, DeFi is an ecosystem that allows for finance to be conducted in a way that replaces banks and middlemen. But what does it replace them with? They’re replaced by bits of code, known as “Smart Contracts”. This system as-is requires no centralised identity data, but lets you borrow, loan or spend money.

So, there’s no KYC (“know your customer”), no AML (“anti-money laundering”), no passports, and no proof of address. The “decentralised” aspect is important to this concept: no one oversees the infrastructure, and it can’t be censored or controlled by governments.

However, that doesn’t stop decentralised organisations from building KYC into their actual product to protect against legislative changes. “It’s easier to ask forgiveness than permission” is very common in this area… but perhaps it shouldn’t be.

The traditional finance system we know now is centuries old and has been optimised as a lightly regulated playground for banks and financial “professionals”. Of course, consumers are forced to use the system to actually exist, so regulations are heaviest on products people have to use, such as savings and checking accounts, pensions, and insurance.

In TradFi (traditional finance), risk management is all about knowing your customer (the person), assessing their creditworthiness, and judging them mercilessly until they feel humiliated. We’ve all been there.

DeFi replaces that by caring only about whether contracts are honoured and about who is doing the activity– it’s “trustless”. That means it doesn’t need the concept of “trust”, since the system is policed automatically.

Developments in DeFi: how can regular people benefit?

The simple answer: by letting someone else do the hard work! But first, we need to look at why that is!

In its quest to replace finance, DeFi has adopted some of the worst aspects of The City: for example, a continual stream of complications, obscure financing schemes and jargon seemingly designed to make sure that regular people would find themselves lost. It’s also populated by what Generation Y disparagingly calls “Crypto Bros”.

Here’s a screen capture from leading decentralised finance provider Curve Finance that shows the available swaps and yields on an alternative blockchain to Ethereum called Polygon. 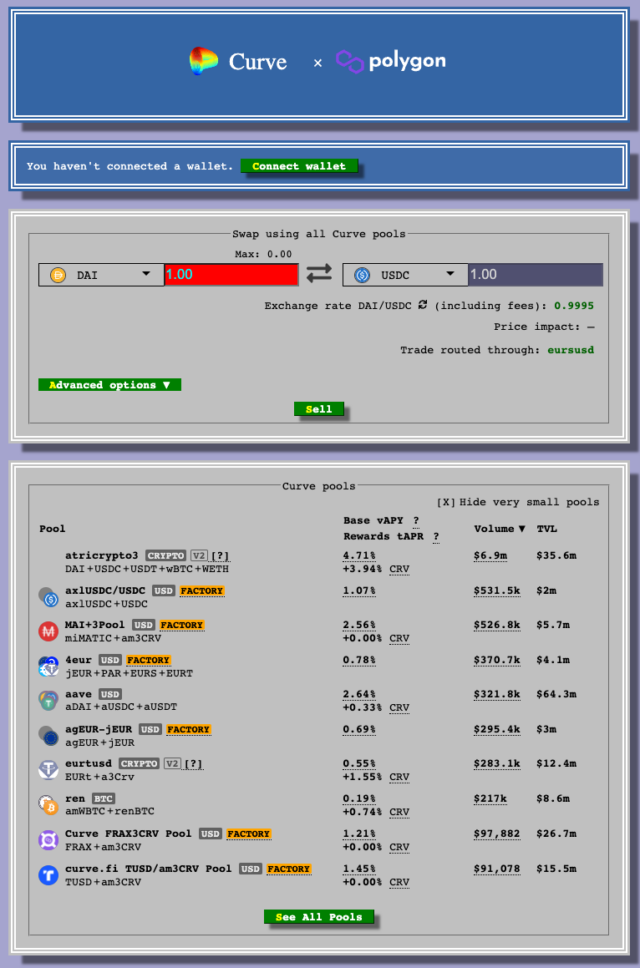 Can you feel your brain dehydrating as you look at it? Now consider that those rates might change tomorrow and that there are a load more blockchains and even more coins. Suddenly “be your own bank” sounds more like a threat than a promise!

Talking about lack of liquidity, that’s another problem with DeFi. Any market needs a source of funds in the middle to operate otherwise buying/selling/lending/borrowing can’t function. This source of funds is called “liquidity”, and like your brain looking at that picture, some projects are distinctly dry.

There are developments in DeFi to improve this situation, such as “Iron Bank”, which essentially allows coins to lend to each other without tying up their crypto, and quite a few “aggregators”: platforms that provide a one-stop-shop to see what’s going on in DeFi and move funds between projects, tokens, pools, and broken dreams.

Being able to see what’s going on on a friendlier screen is one thing, but understanding it is another matter entirely, especially when things change so much every day. Worse, every single piece of advice you’d get on investing in DeFi is “do your research thoroughly”, which, of course, is unrealistic over tens of blockchains, thousands of coins and yield offerings that change every day. 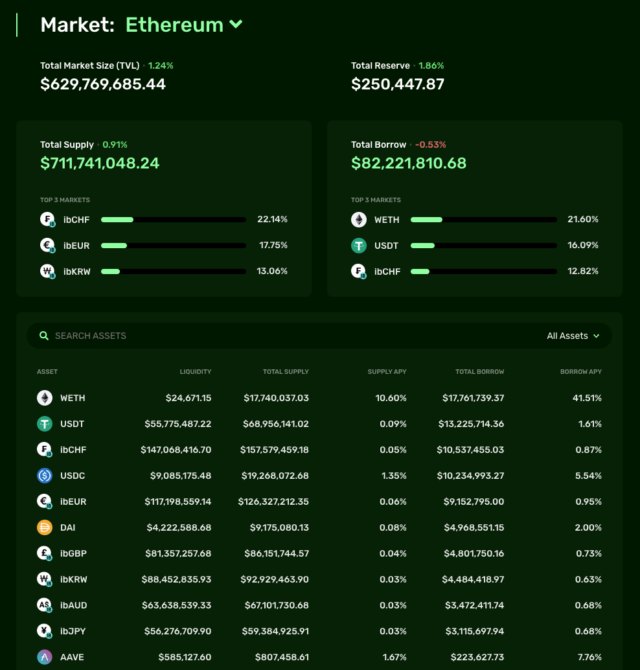 So you know what we’re talking about, here are some of the activities in DeFi that are possible and sometimes even profitable, but which require extensive research:

This is where you stake your crypto at place A, and then reinvest any yield at place B. Yields change continually. Quite often, the yield is in the form of a “native” token with limited spendability, but might come with other rewards and bonuses alongside the yield.

Does someone else need your stash? Are they prepared to pay interest? If so, you can earn interest… if someone borrows your money! In the DeFi ecosystem, there are more lenders than borrowers, though. Lending works very differently in the DeFi ecosystem, with lenders forced to stump up substantial collateral that can be taken if they default.

Decentralised exchanges need a pool of funds to make trading possible and they’re willing to pay you for the privilege. Lending your crypto to an exchange to help them fund trading can net you a yield.

Did you know some tokens called “Governance tokens” that give you the chance to help set the rules for the token’s ecosystem? They can also pay a reward, and they can be bought and sold. The technical term for the ecosystem is “DAO” (Decentralised Autonomous Organisation). Everything is run automatically, but voting mechanisms are built in to allow humans to agree to change things.

This is trading, but there isn’t a company in the middle controlling it. There are a vast number of tokens to trade, and you really should do research on them before touching them. Certainly, you should read the basic information about how their blockchain works (the “white paper”). Does it make sense? What are people saying about it? Is it copied from somewhere else? Does the website work? Are the promises realistic? Is there a real-world reason why the token price should go up? Or is it just a hype thing?

At this point, internet gossip might be your friend, because what passes for the crypto media isn’t big on scrutinising lesser coins.

One word of warning: even if governments can’t stop you from using a DEX, it might not be legal where you are… and that might be a surprise when you come to check out.

An idea in its infancy, and will probably remove the fun out of gaming if you have to rely on it for a living! Will the entire internet become monetized with micro-transactions as well? Only the future will tell.

DeFi is an entirely new area of finance, based on new technology, and of course, all new technology has bugs. You never see the bugs in the software that stock exchanges roll out, but you certainly can see some of the ones in DeFi. Where there’s a bug, there’s a hacker trying to exploit it. Occasionally they succeed.

Every article you ever read about crypto will point out how volatile it is, and this one is no exception. In TradFi, the markets are so big it takes a lot to move them, but some of the markets in DeFi are so tiny that you could move them substantially by selling $100 of stuff. Even the big coins like Bitcoin and Ethereum are more volatile than you’d want because the size of the market can still be moved by large trades done all at once.

AQRU: a better way to invest in DeFi

If your brain isn’t already a desiccated husk, then consider that most of the above opportunities do generate actual profit: they just require a lot of work, research and expertise to make sure that doesn’t turn into an actual loss.

AQRU is an established company in DeFi that does all of those things with skill and insight, to provide a good yield on your cryptocurrency equivalent to many of the yields offered by direct DeFi, but in a set-it-and-forget-it way.

AQRU has simple regulator-friendly onboarding that doesn’t risk problems later, and a choice of the most stable and safest crypto investments. Crypto isn’t risk-free, but AQRU sticks with the tried and tested coins: Bitcoin and Ethereum (the two biggest and most used cryptos), as well as some of the most proven stablecoins shadowing the value of the US dollar, so you can earn investment without worrying about the dollar value of your underlying investment.

How do you get started?

Well, first you sign up at AQRU.io, or in the app (available from the App Store or Google Play). It’s free to sign up, and you get a 10 USDC bonus to invest, no strings attached!

Then, verify yourself and add extra security to your account (it’s for your own security as well as AQRU’s!)

At that point, you can fund your account with crypto sent in from elsewhere or bank transfers of GBP or Euro (no deposit fees apply for either of these). Alternatively, you can buy crypto with a debit card through third-party provider “MoonPay” (fees apply).

Then, you can choose where to invest by choosing one or all of the available options: the only coin that has a lock-in (and the best rate) is the Maple USDC account. Other than that, you can disinvest at any time, and withdraw to fiat free of charge (withdrawing to crypto has a $20 fee). Yield rates are available on the app: currently, 0% on Bitcoin and Ethereum, 0% on USDC stablecoin, and 7% on Maple.

Whichever of those you choose, it’s certainly easier than researching thousands of coins!